Navratri: As we grow

Navratri is a festival dedicated to the worship of a Hindu deity Shakti. The word Navaratri literally means nine nights in Sanskrit, nava meaning nine and ratri meaning nights.During these nine nights and ten days, nine forms of Shakti/Devi are worshiped. The 10th day is commonly referred to as Vijayadashami or “Dussehra.” Navratri is a very important and major festival in the state of Gujarat and Mumbai, where during all these days the traditional dance of Gujarat called ‘Garba’ is been performed by everyone.

Being an Gujarati , I very well know the way we celebrate the “Navratri“. We celebrate it every year ,but as we grow older ,the form of celebration changes. You can consider it as part of series “As We Grow”. Earlier I wrote Friendship Day: As We Grow . Unlike other festivals it is celebrated by people of all ages, of course their way of celebration is different. As a child , they don’t know much about it. All nine days they are excited about prasad people distribute after Aarti . Frankly speaking I really enjoyed eating different prasad during Navratri days. 😉 They enjoy “Garba” with their little friends. 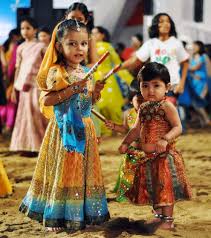 And they used to play Garba Ground/Temple near their house with their new traditional cloths. While their parent prefers to sit and watch their children playing. If someone forces them , they don’t mind to play for some time. Even their grandparent really enjoy these days.  But that is not the case these days in most places. Small playground is not fits peoples status. People started moving to famous club and big organizers. Even that is good because at least they are enjoying the days. But after getting job or while studying at different places people especially Gujju  miss those days.In post Friendship Day I wrote some different way of celebration as we grow but things are still same in case of Navratri if we ignore few things like 1. It become part of product promotion etc. Children play Garba. Parent love to watch them. Grandparent feel happy to see their grandchildren playing and they remember their old days.And yes for little kids, they still want that different Prasad.🙂

Curious | Learner | Doer
View all posts by shahsamarth »
← Interesting Things about God
Diwali : As We Grow →